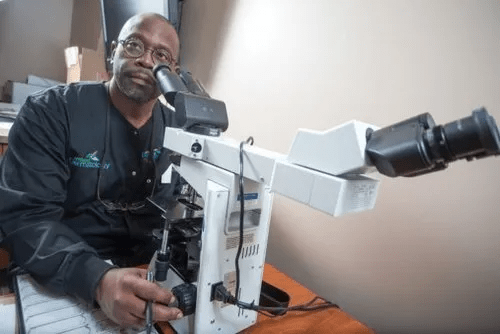 Being a late bloomer: How this one-time engineer m

Dr. Richard Averitte, founder, CEO and managing partner of Affiliated Dermatology in Scottsdale, is a johnny-come-lately to the world of medicine.

“I always thought about medicine, but I wasn’t really into school and didn’t want to be in school that long,” he said.

Born and raised in Akron, Ohio, Averitte worked as an engineer for seven years when he noticed that many fellow engineers were working for the same firm for decades with not much chance of upward mobility.

“They started getting phased out and became irrelevant,” he said. “That started to concern me.”

Even though he was slated to become a vice president, it wasn’t something he thought he could count on.

Plus, he was traveling 25 weeks out of the year, living out of a suitcase.

“When you’re a young man that works out, but as I got older and wanted to have a family, I started thinking this isn’t going to work out so well,” he said. “I was making good money, but it wasn’t the best life. I didn’t like that.”

Averitte said he considered starting his own engineering construction company and was starting to look into getting financing when he ran into a college friend who had gone into medicine.

“It started me thinking about being a physician again,” he said.

He was almost 30 years old when he began the medical school process. Averitte was what some consider a “crooked arrow” because he didn’t go straight to medical school out of undergraduate school.

“That’s the nice term for a non-traditional student,” he said.

During his medical school interview process, he was told students are very focused. It was suggested that because he was married and had a mortgage, he might have too many distractions to succeed.

He applied to at least 30 medical schools and faced many rejections because he was a non-traditional student.

The first college to accept him was Medical College of Ohio — now the University of Toledo College of Medicine and Life Sciences — about two hours from his home town.

Usually for medical students, the third year of medical school is the toughest. Making matters worse during that third year, Averitte divorced and his father died six months later.

“I’ve gone from having those times in life where you go through a really, really bad period, then there’s some light at the end of the tunnel better than you ever imagined,” he said.

After graduating from medical school in 1998 and before embarking on residency training, Averitte’s brother, who lives in Phoenix, set him up on a blind date with Marlie Dresher, a coordinator of the cardiology fellowship program at Banner University Medical Center-Phoenix.

“I’ve only been on two blind dates in my life,” Averitte said. “The first was the worst date I’ve ever been on, and the second was the best one.”

The couple, who have 13-year-old triplets, will celebrate their 17th anniversary in November.

During his residency training, Averitte began making plans to start a dermatology practice in Scottsdale. At first, he was paying a consultant to help set up the business, with Marlie pitching in.

Over the years, as Affiliated Dermatology grew, his wife pitched in more, overseeing billing and physician credentialing. Today, she is the CFO for the practice that employs more than 150 people.

At first, it was tough working together while raising triplets, Averitte said. Particularly in the beginning and after delivery while his wife worked at home on bedrest.

“We had to keep things going,” he said. “There have been times over the years that I wanted to talk business and as a mom she didn’t want to.”

But for the past 11 to 12 years, they have date night every Thursday, which he said has been instrumental in maintaining their relationship over the years.

“I see couples that work together who do business together and everyone thinks it’s hunky-dory,” he said. “Figuring out a way to be married and do business and not have one of the two overpower your life is really complicated. We do a real good job of it now 15 years into it. But there’s been some times where, man is it gonna be the marriage that breaks the business or the business that breaks the marriage.”

Title of your autobiography:“Flirting with Disaster”

Will never do again: Do business with friends

What makes you tick: Family, loyalty and fear of failure. I love to see things grow.

How you celebrate life: I love being active outdoors.

An effective business leader: The ability to motivate large groups to work as a team.