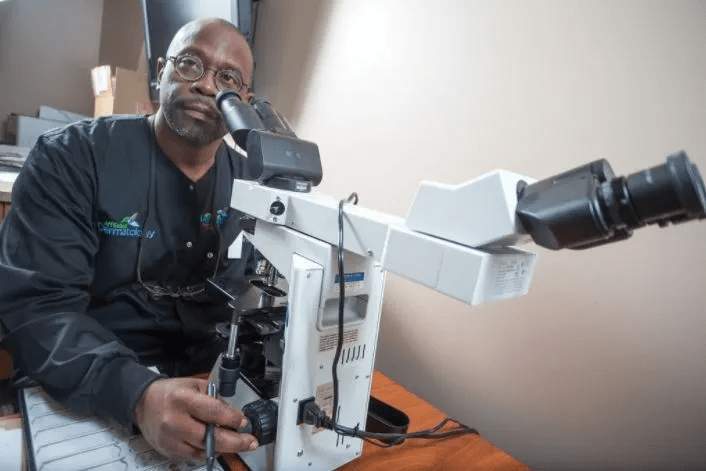 Fueled by the Sun

Our desert climate comes with a cost: skin cancer. One physician has built his practice by specializing in treating it.

When he arrived in Arizona fresh from completing his residency in Cleveland in 2002, Dr. Richard L. Averitte Jr. intended to focus his new practice on general dermatology and aesthetics. 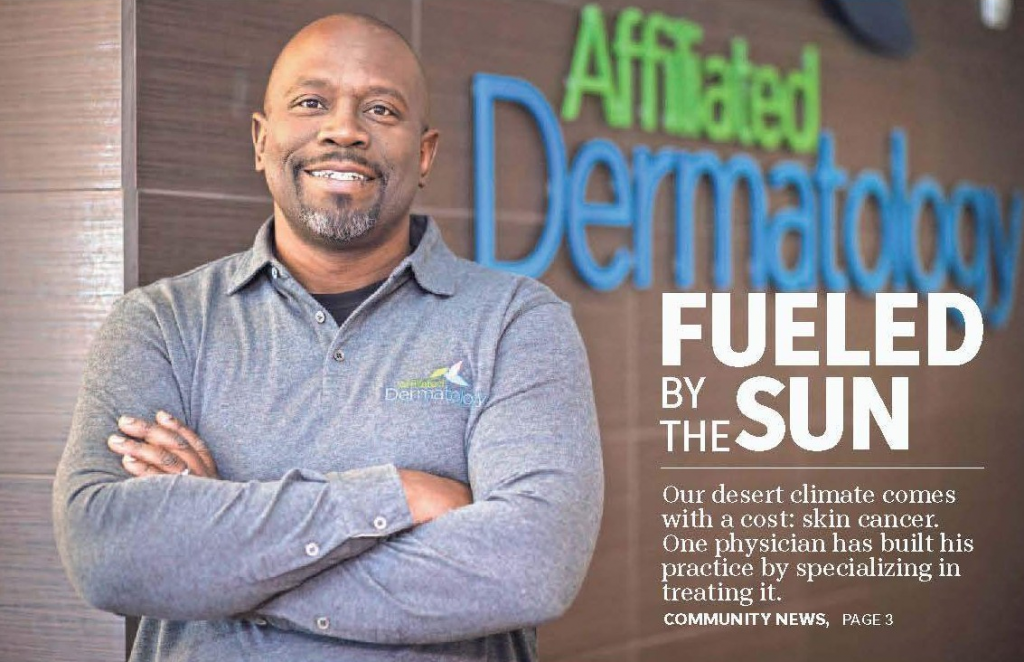 But recognizing an unforeseen and unfortunate trend offered a detour from which his Affiliated Dermatology has thrived and secured a solid niche.

At the time, Averitte had just opened his practice in a space he shared with another physician. As he prepared to focus on aesthetics, he saw that not as many Arizonans took preventive measures regarding sun exposure as he presumed. After seeing people baking out by the pool or spending hours doing out-door activities under full sun, it all made sense.

“People live here for a reason. The outdoor lifestyle, endorphins from the sun, the great weather. … But there’s the trade-off,” he said.

It didn’t take long for him to get inquiries from patients with a range of symptoms that could indicate cancer. But, due to the shortage of dermatologists, they often had to wait months to see a doctor.

He saw a need that wasn’t addressed and sought to change that. Soon, Ave-ritte found his young practice getting busier and growing fast. That side took off more than aesthetics. It’s this specialty that continues to propel Affiliated Dermatology’s growth today.

“With the sun exposure here, the need is so large. The average wait time (to see a doctor) can be up to six months. We expand so we can see more patients sooner,” Averitte said
At first, he was on only one or two in-surance plans, so Averitte would see pa-tients for the cost of their co-pay — $50,$30 or even $10. Over time, he gained more insurance plans, and those pa-tients stayed on. Word of mouth spread.

What started as a one-man practice in a shared 1,200-square-foot office space now encompasses its headquarters in Scottsdale, plus offices in north Phoenix, Anthem, Surprise, Gilbert and Ahwatukee Foothills. 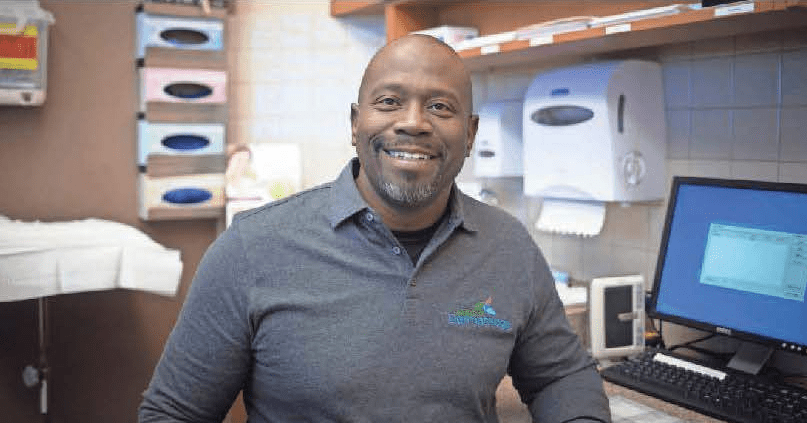 All but the Ahwatukee location were built from the ground up and span much larger than typical dermatology practices, he said. Affiliated’s offices range from 6,500 to 18,000 square feet, which allows the business to offer patients comprehensive diagnosis and treatment for a range of concerns from acne to cancer.

Approximately 80 percent of Affiliated’s patients are there for a cancer-related concern, according to company data.

Averitte is part of a solution to the most common cancer in the U.S., according to the American Academy of Dermatology. More than 9,500 Americans are diagnosed with skin cancer daily, and the annual cost of treating skin cancers is estimated at $8.1 billion.

An unusual spot on her neck first brought Shoshana Korrub to Affiliated Dermatology a year ago. Korrub appreciated how nice everyone was during what she called an awkward process of removing it and informing her quickly that it was benign. She has since gone to get periodic skin checks at the Gilbert and Scottsdale locations.

“Living in Arizona and being in the sun, it’s always a concern of mine,” said Korrub, who lives in Gilbert. “Every time I’ve gone, the waiting room is always packed. But they always greet you right away, which lets me know they see me.… They are all just so nice and friendly.”

Dave Zoloto has been getting regular skin checks and has had a couple of moles removed since first coming to Affiliated in 2010, on the advice of his physician. His wife and daughters are among the nearly 20 people he’s referred to the practice. Zoloto is a general manager in the automobile sales business and recommends Affiliated to his employees, who are out in the sun often.

A busy professional who has little time to wait around, Zoloto said he ap-preciates that the staff gets him in and out quickly and is very communicative regarding appointments and follow-ups.

“I’m in people business, and custom-er service is important, and they do that well. They are very respectful of peo-ple’s time,” said Zoloto, who lives in Scottsdale.

Following an unexpected path is not an unfamiliar journey for Averitte. A for-mer project manager and engineer for a national company that ran million-dol-lar, high-profile construction projects, Averitte cashed out his 401(k) to go to medical school.

He graduated in 1998 and got into dermatology, one of the more appealing and in-demand fields to enter, he said. Instead of spending breaks in his final year of residency skiing or going to the Bahamas like his peers, Averitte flew to Phoenix on a scouting mission for office sites for his soon-to-be practice. In 2002, he moved and launched Affiliated. The morning after getting of the plane that summer, he saw his first patient.
The next year, his wife gave birth to triplets. There was no time to rest or take a break. This is the same rigor he’s maintained for the majority of his prac-tice.

“I had to make it happen. I couldn’t hope business would come to me,” Averitte said. “I was hustling hard for 15 years.”

That hustle and not taking success for granted has paid off. In addition to his six locations, Averitte created a residency program aimed at educating the next generation of professionals to meet increasing demand for care. He also established the non-profit Arizona Skin Foundation, which provides financial aid to skin-cancer patients unable to afford treatment.

However, incorporating a local-first approach to patient care has become Averitte’s newest tool in his treatment arsenal.

His Ahwatukee office is the first in an acquisition model that Averitte put into motion this spring. With large, big-box-type health-care companies making lucrative offers to physicians about to re-tire or who just want out, the dermatology field faces the same fate as other industries. This, Averitte explained, is especially true in Arizona, with other hotbed states like California and Florida already saturated.

By acquiring these on-the-market practices, Averitte is keeping care local and actively run by a physician. He said his is currently the largest dermatology practice in Arizona that’s private and physician-owned and -operated.

The pressure from outsiders to sell is daily, he said. It’s the reason he also has an acquisition team and lawyers.

“We’re in a fight to preserve care for Arizonans in Arizona versus having someone at headquarters in New York or Pennsylvania telling us how to care for our patients,” he said. “The business model is good for business, but it’s also good for patient care.” 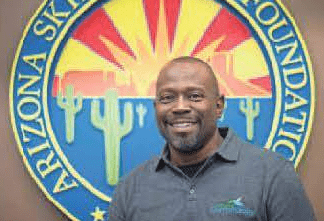 INTERESTING STAT: More than 1 million Americans are living with melanoma, according to the American Academy of Dermatology.