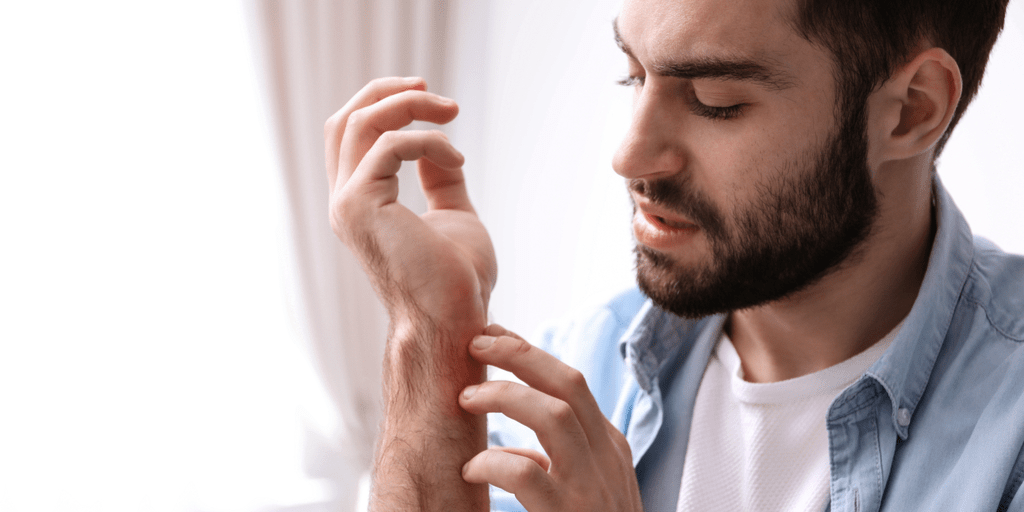 Rashes Men Get (and Don’t Like to Talk About)

Most men avoid seeing a doctor until the last possible minute, no matter what seems to be ailing them. Whether it’s a head cold, a twisted ankle, or unidentified rashes that are driving them crazy, men will self-diagnose and feel good about it.

But ask any man who has had an attack of athlete’s foot or a bout with jock itch that won’t go away, and they just might concede that they need medical help every now and then. Men who work out and sweat are at higher risk for developing skin rashes, according to Suzanne J. Friedler, M.D., a dermatologist who has a practice in New York City. “These can be caused by skin irritation or by infection,” Dr. Friedler said. “Fungus loves to grow in warm sweaty areas, such as the groin and between the toes; this leads to jock itch and athlete’s foot. Keep these zones cool, clean, and dry to minimize your risk of getting a rash.”

In addition to heat and moisture, jock itch can be caused when skin rubs against clothing and even other areas of the skin. The resulting redness and irritation is enough to drive a man crazy and want him to itch the affected area uncontrollably at times. Of course, that only makes the condition worse. “No man deserves to suffer from jock itch,” according to Andrew Newman, DO, of the Affiliated Dermatology group in Scottsdale, Arizona. “It’s a painfully itchy rash of the groin that is caused by fungus. This fungus grows wild and causes inflammation in the skin of the groin that can cause tremendous discomfort.”

The same type of fungus that causes jock itch can also cause the annoying athlete’s foot. And it’s not just men who are victims of this ailment — women and children can also be affected. Be cautious if you do get athlete’s foot, because it is contagious and if someone comes in direct contact with a wet towel, shoes, or even the floor you walked on, they may contract it. “Prevent and treat athlete’s foot in the same manner as jock itch,” said Dr. Newman. “An important tip is to put your socks on prior to putting underwear on. This will reduce the spread of fungal spores from your infected feet to your groin. Sometimes, men get recurrent athlete’s foot, and in these situations it’s not unreasonable to throw out your old shoes that are potentially petri dishes of fungal organisms. In summary: Hygiene is king.” In rare cases, the fungi can only be cured with an antibiotic medication.

Other Common Rashes That Men Tend to Get

Rashes will come and go, but you can do your part to prevent them and treat them before they get worse. Jock itch and athlete’s foot can be treated with over-the-counter medicated creams, but if the condition persists, or if you develop a fever, you need to see your physician for further treatment.

Originally published by HealthCentral . “Rashes Men Get (and Don’t Like to Talk About).” John Riddle, Patient Expert. March 6, 2018. John wrote for HealthCentral as a patient expert for Allergies, Anxiety Disorders, Diabetes, Erectile Dysfunction, and Sleep Disorders.